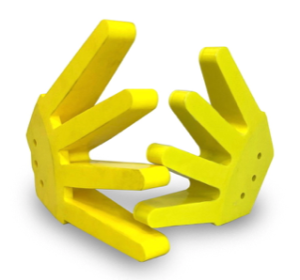 An Ohio farm equipment company located just 30 miles west of Seco Machine has found a Seco urethane product ideal for one of its most interesting offerings – a “finger weeder” tractor attachment that rapidly removes weeds from plant rows. Since 2019, Seco’s plant in Green, Ohio, has been providing the urethane “fingers” for the finger weeder attachments to Tilmor in nearby Dalton. The supply relationship began with field tests of several versions of the finger and progressed to regular deliveries of specific high-demand products, said NICK ERGON, urethane operations manager for Seco. “We worked with the customer on the different flexibility they needed for the parts and produced several variations to suit their needs,” Nick said. “We decided on a certain specification, and it’s working. It’s taken off pretty well.” Tilmor orders the fingers in sets of 500 and, to date, has purchased several thousand. The finger business points up the value of urethane, which can be used for many different applications, Nick pointed out.  “It’s such a tough product by itself,” he said. “Our team at Seco can make molds from 3D printing, and we will test-run the parts before we make a permanent mold. The Tilmor parts were developed from the 3D molds. We made several prototypes that the customer tested literally in the field. We then made the molds in aluminum in production quantities so we can run several hundred parts per day.” The urethane finger weeders rotate between rows of crops to dislodge small weeds. They make a farmer’s job easier by reducing the need for hoeing out weeds by hand. The first Seco fingers sold to Tilmor were 15 inches long. Now Seco is working on 21- and 13-inch styles. They’re also supplied in medium and hard varieties. Meanwhile, Seco Machine is working with Tilmor on a totally different product – a urethane tire tread for a two-wheeled tractor.

“We have some prototype tires, which is kind of a new thing for us,” Nick said. “That’s in the making for their equipment.” Tilmor, which specializes in equipment for small farms, is led by a family that also operates a fourth-generation family farm. In recent years it has introduced several new products that aim to make family farms more efficient.

These urethane “finger weeder” parts from Seco Machine are used on tractor attachments that remove weeds from rows of crops.

We're not around right now. But you can send us an email and we'll get back to you, asap.